Firstly...blimey, my last blog was 24th August and its now 1st October...doesn't time fly?  Soon be Christmas then the New Year...just three more months until 2013...bit of a shock that!

Secondly, Jolene from Craft Pimp and Kitzbitz Art Glass Jo's blog has said that she is going to do a blog a day for all of October, and I like that idea, so I am too!  I will do a give away too, something fun for the dark winter nights that are coming.  I will post that on here this week, just write me a comment and possibly an idea or two, and we can do the draw at the end of month...31st October sounds good to me.

So.  What have I been doing?  I did Hereford Art Week in early September and it was brilliant, lots of visitors, lots of sales, lots of commissions and lots of exhausting fun.  Here is a great pic of my set up 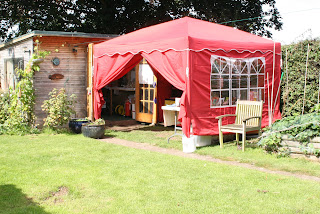 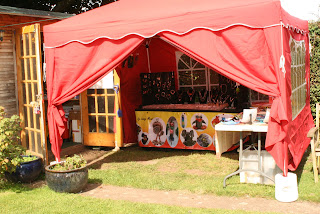 There was only one bad weather day, the first Monday, and it poured and the wind...I was scared for my gazebo, but still I had plenty of visitors, something I didn't expect that day.  It was so enjoyable that I will definitely be doing it again next year.

Sadly, a few days after Hereford Art week finished, we lost our last ex-battery chook, EverReady, poor Frankie was all on her own and so sad.  The hubby wanted to raise baby chooks, even hatch his own eggs, but that would have meant that poor Frankie would be on her own for months, all through the winter, so I announced that wasn't going to happen and Frankie was getting a friend.  We looked on line, and found a lady in the Gower area of Wales (the most beautiful place ever) and she was downsizing her flock of chickens and giving them away for free.  My hubby has always wanted to take the dogs to the beach on the welsh coast, so just over a week ago, on the Saturday, the sun shone, it was a glorious day, and we loaded up the car with a picnic, two golden retrievers and a big cardboard box and set off.  We had a great morning on the beach, sadly no pics, I left the camera in the car! but, we did collect 5 new birds and here they are...


They have all settled in brilliantly and now all come running when you call 'girls, corn...girls...' its so wonderful seeing their fluffy bums all waddling up the garden for something tasty to eat, and we are once again getting delicious fresh eggs.  Yum.

I have been busy with commissions and life, so have not had much of a play in the studio, but have been fusing a bit - more about that later in the month, I have been working on some new ideas.

So just before I sign off tonight, here is a lampworked Dragon Queen

She is available in my Etsy shop along with this jolly chap....

Just click on the links to go to Izzybeads

Before you do though, click on Jo's Blog, she whom makes wonderful murrini and is definitely better at blogging regularly than me!