Just listed on Ebay, these fabulous Dragon Scale beads, I do love everything and anything to do with Dragons and make believe, so much so that this afternoon will be Dragon making afternoon I think, the kiln is on!!


Also listed this morning is Henry.  Isn't he cute?  This adorable English Bulldog is wearing his red, white and blue necktie and just waiting for the Diamond Jubilee celebrations to begin, rumour has it, he even has tickets to the see the Long Jump in the Olympics, but I think that really he has other plans for the sand box!

Click on the link to go to my Etsy shop.

Its hard to believe that yesterday the sun was shining, we had a walk down to the river, the dogs had a swim, I took pictures in the garden of the girls enjoying the sunshine  the bugs in the grass and glass dragon  beads catching the sunshine and sparkling.  Then.   Today, after just walking in what can only be described as good old British downpour, both dogs are black and grimy from the grit and grime on the lanes, the three of us have been soaked to the skin, had to avoid the river due to flooding and fast flowing and now have the heating on to warm up and dry out!  Today isn't any old April shower!

I have been fusing some more bowls and have a few more fusing projects planned, but am rather taken with this Butterfly Bowl.


Today I am planning on finishing the practise piece I have designed to go on top of my Aunts wedding cake, my gift to her when she marries next month.  Its so exciting.

One thing I won't be doing today is gardening!!

Take...one Golden Retriever, one country park walk, one deep puddle, one wallowing hound and several towels and you get... 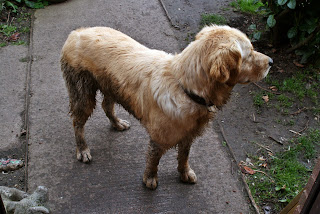 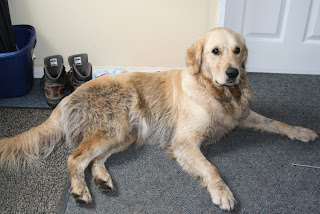 ...and what he should look like, taken last year so he has slightly more feathers now... 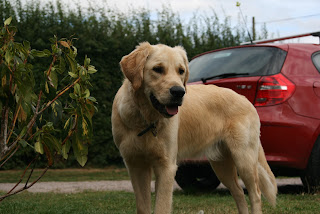 Flame Off has come and gone, 'twas a long weekend, but a good one.  As well as putting faces to names, from the forums I chat on..and waste far too much of my day, not to mention getting involved with the seed beads!..many beads found new homes and it was nice to get away for a few days, but nicer still to come home to my dogs.  I did miss my dogs, and my chooks and cats and I suppose the kids!

There was a very special someone at the Flame Off, and I fell in love with him.  Bentley, a five and half month old trainee guide dog, is currently staying with Ruth and Andy from A&R Lampwork Beads, and for the next few months they will take him everywhere and introduce him to new sounds, sights, smells and experiences.  He was such a sweetie, all blond and playful and puppy and just yummy...I will be making lots of Bentley beads and rather than take pics of the lampwork on display at the Flame Off I took pics of Bentley, here is one of my favourites...

Isn't he just so cute?  He was so excited.

So other than the Flame Off, whats been up in the Izzybeads shed? This...

My first fused glass bowl, that went to plan!  I have done a couple and they have worked, but not as I originally intended, happy accidents, but this one did exactly what I wanted.  Rather pleased with this, now just have to work on taking a decent picture, photographing fused bowls is not easy!

I haven't had much time for lampwork since I got back from the weekend, but have been listing some of the beads I have, this gorgeous guy is sold and is going to be on his way to America in the morning. 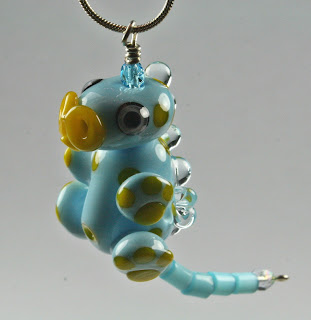 So its not just the boy person with his VW Camper Van now!  I loved making these fused glass coasters and am chuffed to bits with how they have turned out.  Definitely going to make some more.  The VW vans are decals which are fused into the glass in the kiln.  I have also made these beautiful green checker coasters...

I was asked ages ago to make these coasters, its taken me this long to get the ones I wanted, these ones have worked!!  They look really good in the green too.

For my final picture of the day, some glass Orchids and Apple Blossom beads. 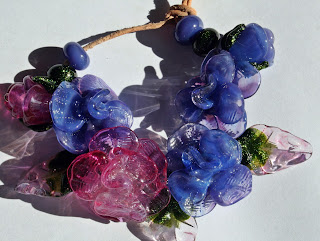 Just listed in my Etsy shop, these beautiful glass roses.  Its been a while since I made roses to sell.

Dave, the chook is no longer with us, she died yesterday, very sad.  I was hoping that she was going to get better, the signs all looked good, but....nature took over and she didn't make it.  My son dug me a nice big hole under the buddleia and we said goodbye to our lovely chook Dave.

Good Friday today, the sun is trying to make an effort and shine, I am nearly ready to go to the river, kids are still in bed, hubby is in bed after the night shift, so its very quiet here.  Enjoy your Easter weekend, may the Easter Bunny bring lots of chocolate. 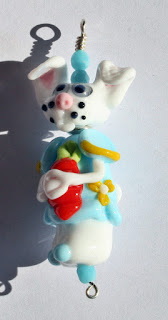 Interesting morning and its not quite 10.30am.  Those following my blog will know that Dave is a chook (chicken) and she has been poorly for over a week.  During the nice warm sunny days she was in a separate pen in the garden, separate from the other girls, Ever-Ready, Poppy and Frankie, and seemed to get better by the day, spending her nights in the cat box in the utility room with the elderly mogs, Claude and Megan.  The last few days of cold and snow! have seen Dave take a turn for the worst, but after spending most of her day yesterday in the cat box, it was just too cold outside and she was so miserable, she seemed to be much better again today with plenty of energy, the downside being that the utility room stinks of chicken poop and of course poor Dave, who is having difficulty in standing upright for long periods, has chicken poop stuck in her feathers on her bum.  So...after walking the dogs this morning, and actually seeing some blue sky, I decided to bath Dave and clean up her bottom and make her smell a bit sweeter.  As my daughter is on Easter holidays, she was roped in to help.  Still in my water proofs from walking the dogs, I filled the utility room sink bowl with a nice luke warm water and a touch of dog shampoo, for bubbles! and a few drops of TCP to kill off any bacteria, and popped Dave in her bubble bath. 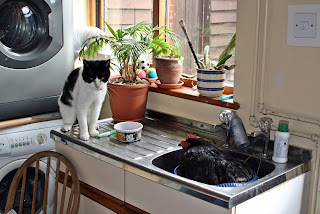 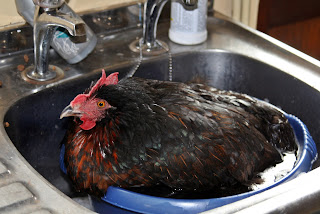 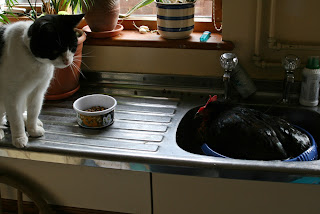 Claude, our spring chicken mog at 19 yrs young, was having some breakfast when the visitor to his room was taking a bath, they touch noses and its fair to say, Claude was the one on the back paw, Dave was not impressed at a man watching her in the tub.

After a few minutes soaking in the bubbles, with the help of my daughter I lifted Dave into the towel that we had put on the draining board.  It was at that moment the phone rang.  Daughter answered it and gave it to me.  'Are you busy?' said the women at the other end 'just bathing a sick chicken' I said, 'how can I help you?' Meanwhile my daughter is trying hard not to laugh whilst holding onto Dave so she doesn't fall off the draining board.  'Oh' said the voice.  'I will call back later'  'if you are sure?' I say and that ends that phone call.  Daughter is beside herself, 'best way to get rid of cold callers' she says.  I wonder if the cold calling lady has stopped laughing yet?

Daughter then took a picture of me, giving Dave an after bath cuddle. Yes that is me.  I don't have bad hair days, I have bad hair lifetimes, I am pale due to this wretched virus that just will not shift and have just walked the dogs down by the river and picked up poop, not to mention bathed a chicken, I do sometimes look a little better than this...not much...but a bit...

I can't believe that last week, I was stood at the river, with Iz and Defi, in a t'shirt, getting splashed and having fun with the sunshine beating down at 10 in the morning.  This morning, I dragged back out the polar experience water proof trousers - extra padding and sooo super warm - the bobble hat and winter gloves, before heading to the fields, battling against the icy rain and occasional snow flakes to get there.  My nose was frozen, my fingers frozen and my toes, even through the thermal socks and stout walking boots, changed from pink to blue.  It was a miserable walk, making it even more miserable coming home to soggy dogs, wet towels and then drying dogs stinking in the kitchen.  Last week all the doors and windows were open and the dogs dried off in the sun, this week........so depressing. 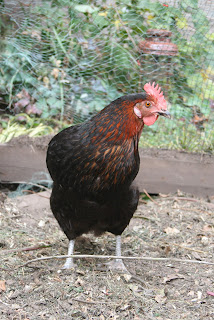 Then there is poor poorly Dave.

The picture is my beautiful Dave, taken last summer, she is so poorly now, I don't think she is going to make it.  For the last week, Dave has been separate from the other girls, in a pen in the garden, on the grass enjoying the sunshine and seeming to recover, but now the cold and damp weather is here she is not doing so well.  I took her back outside this morning, she sleeps in the utility room at night with the elderly mogs.  I popped her in the pen, gave her some lettuce leaves, her favourite and organized the big fishing umbrella to give her some shelter from the cold wind and snow, but she was so miserable that she didn't touch the lettuce leaves, I knew something was wrong.  I have now brought her back into the utility room and she is not looking good.

Just a few pictures of beads to try and brighten this dreary day... 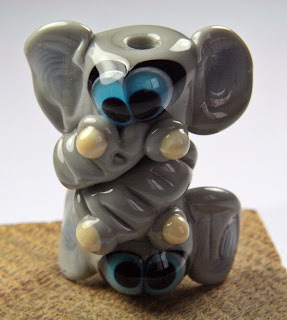 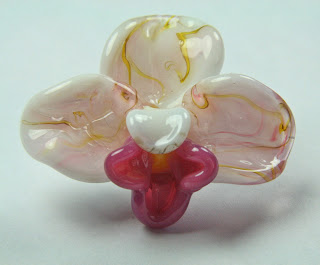 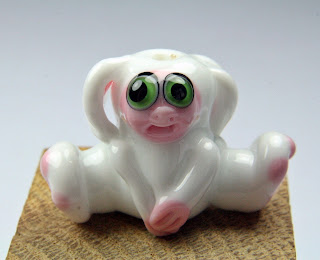 Baby Rabbit - Etsy
All available to buy and cheer up that miserable winter day, in my Izzybeads shop.

Now, here is a lady I am in awe of.  Her fused glass pieces are beautiful, but it is her paintings on the ceramics that have me drooling. 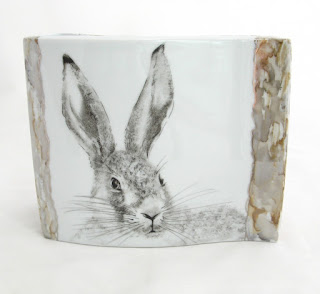 Jill produces, mugs, bowls, plates and beautiful decorative art for the walls, she also makes some extremely unique and beautifully designed jewellery, from aluminium cuffs to fused glass jewellery and ceramic pendants which also use her Zentangle or Jilldoodles designs. 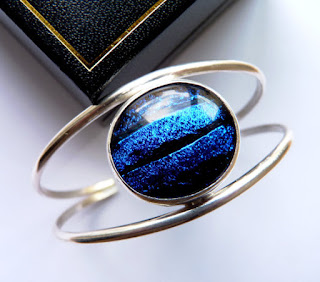 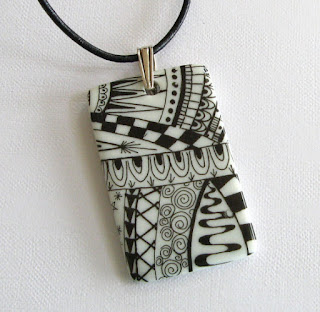 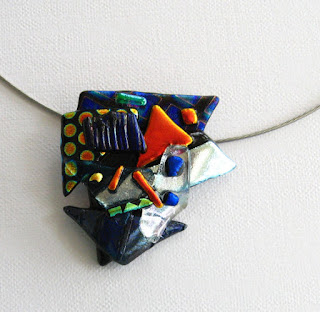 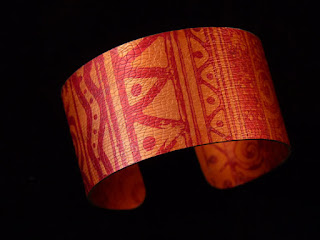 All of these beautiful pieces are available in her on-line Etsy shop, each hand crafted, beautifully finished and uniquely designed.  Kiln Fired Art Etsy Shop  She really is a lady of many talents.  She is is available to commission some of her larger pieces, to showcase in your home.  Jill has a wonderful and entertaining blog, with pictures of her canal side studio and tales of what happens in a hot studio.  She has an Etsy shop and a website.  All the links are below.  Make a cup of tea and drool over her truly unique pieces, by following the links.