So its been a bit warm.  The sun has been shining, the skies have been blue, the breezes have been out of sight and I have been down the river with my dogs every morning, except Tuesday morning when my son had a wee accident on the farm and damaged his back, resulting in a trip to Accident and Emergency, some pretty potent pain killers and he is at home with me...driving me nuts already...not helped by the fact that its almost too hot to turn on the torch and the kiln.  I did try this evening, but having forgotten that I had taken a Piriton anti-histamine for the horse fly bite I got yesterday morning down at the river, I was nodding off in the heat of the studio...not a good plan!

This morning the horse fly bite has grown in size and I am rivalling my son for moaning about my bad back, my shoulder blade being twice its normal size and bright angry red and itching.  Its still too hot to torch, so I had a little look in the bead box this morning and found some Christmas and Halloween beads, not that I am trying to wish the summer away but more trying to think cold! 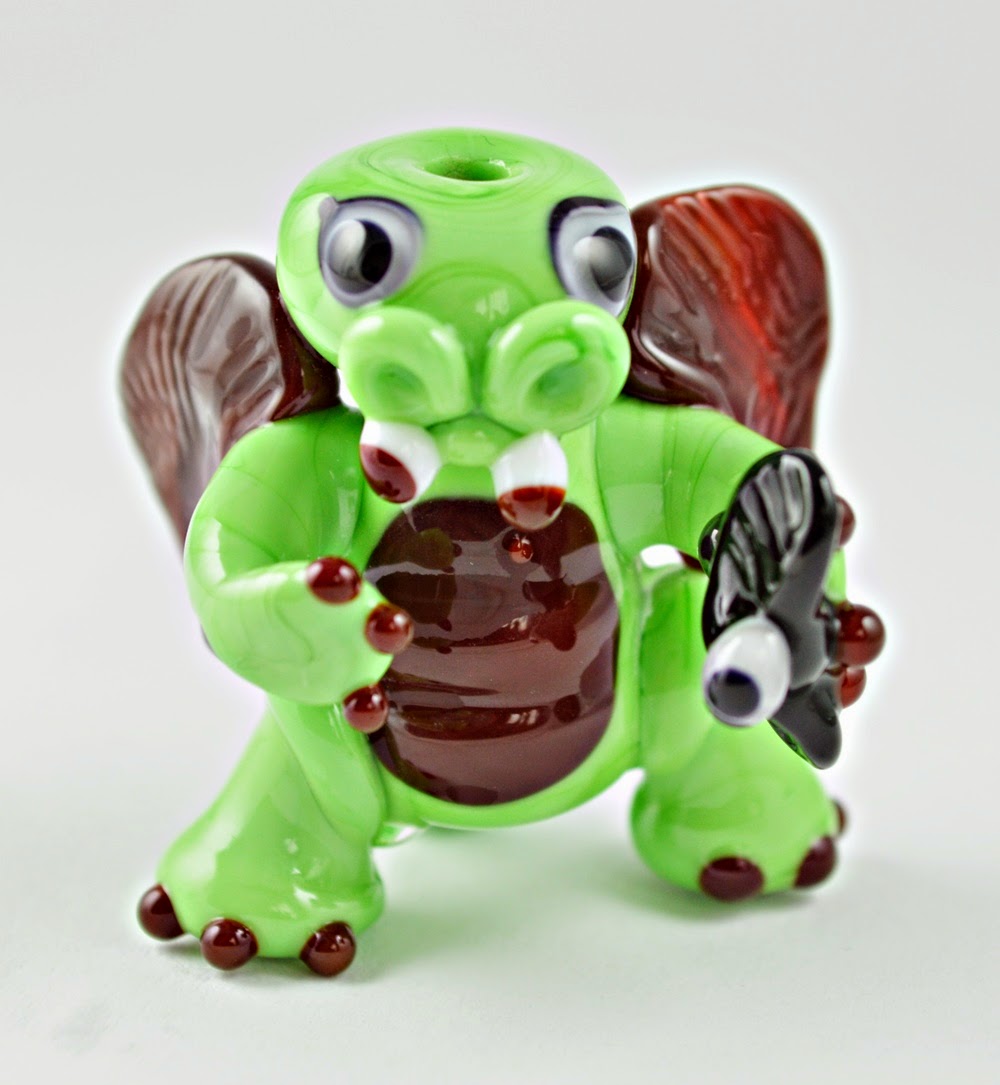 This Count Drag-ula I put up on one of the Facebook selling pages for lampwork beads and he immediately found a new home.  I am feeling the urge to create some dragons and dogs when the sun cools enough for me to not melt faster than the glass rod in the flame of the torch whilst in the studio.

This ski-ing Penguin is on eBay and looking for a new home.  Already number one of the salom down hill ski race in the Polar Bear Ice Games, he is working up to being the best down hill racing skier of the King Penguins. 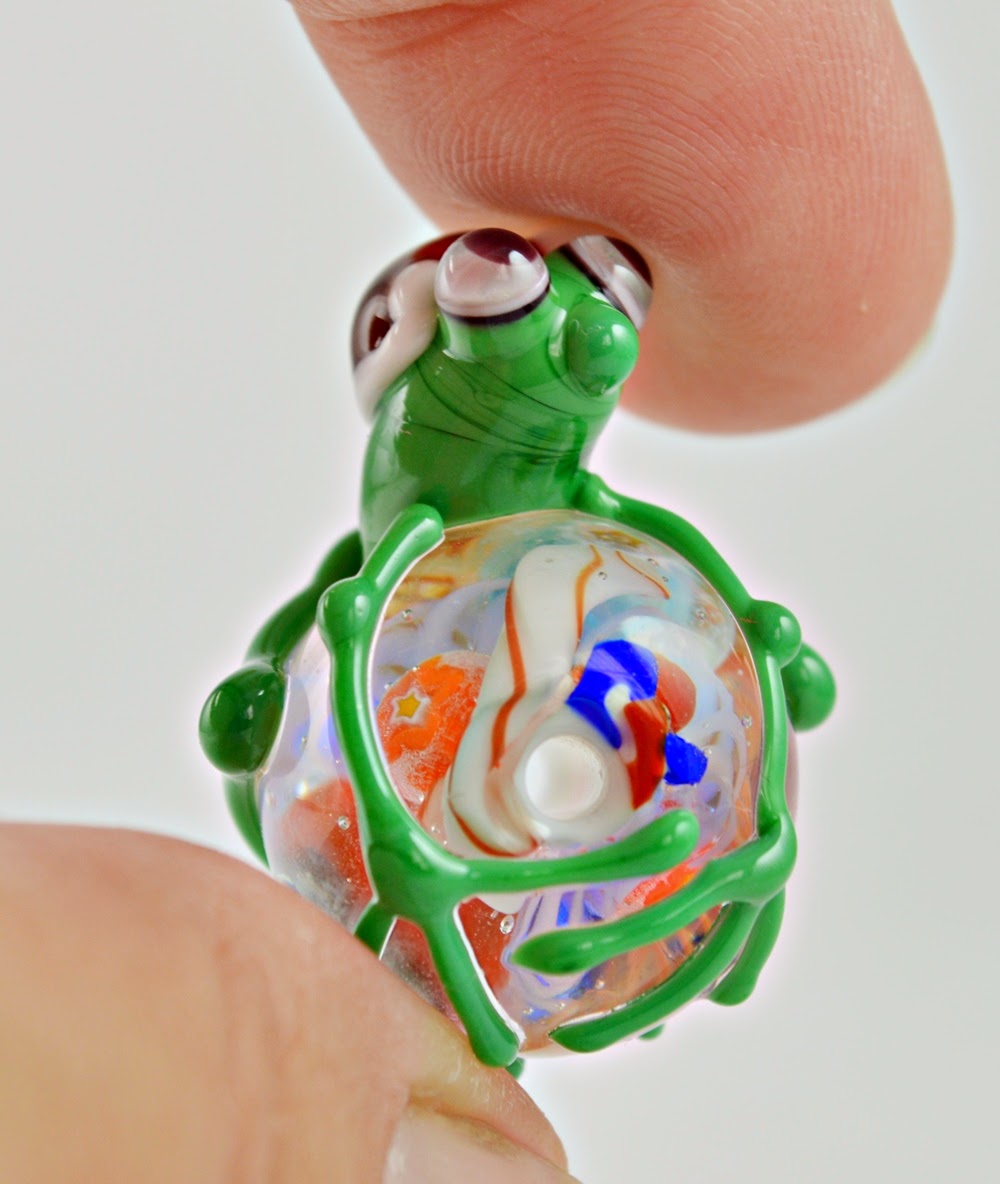 This is the Christmas frog, a bit like the Christmas Grinch, he hates Christmas cheer, all that fresh frost on the river making it skiddy to hop from lily pad to lily pad..honestly anyone would think its a holiday.

He is still looking for a new home on one of the Facebook selling pages, click here for the link to the Lampwork Bead Market its free to join up to the page and lots of lovely beads to browse.

Right back to finding something constructive to do...might do some writing.....

Having a weekly round up :)  A comment kept being said about cocktail rings with my roses so I had a little play :)  This one is a lovely orange rose with copper wire and coral semi precious stones, its adjustable so will fit any finger...just imagine how fab this will look at a summer do :)

﻿
﻿﻿﻿  I am still very much on my flower frenzy, I just can't seem to get enough glass flowers and real ones in my garden.


The beautiful poppy is from some seeds given to me by a friend last year and they are glorious,  big blousey flowers, my favourites. 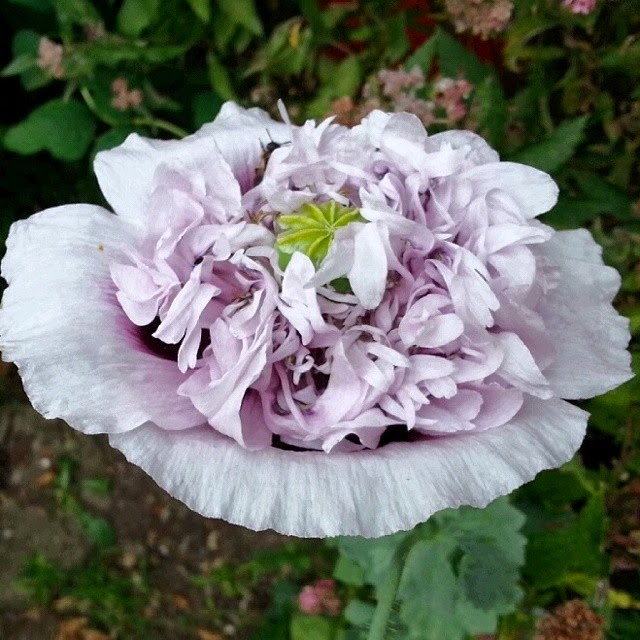 The teal and coral flowers are have a lovely beachy feel to them.  I do like contrasting colours.
﻿﻿﻿
﻿
﻿  I think I am thinking ahead already with fabulous Halloween cats, inspired completely by the wonderful and most favourite book of mine Slinky Malinky by Lynley Dodd.  I love Slinky Malinky!  The blue bead has found a home but the orange mog is still waiting for his fur-ever home in my Etsy shop.  The Poinsettia flower and buds are my reminded that Christmas isn't too far away, still plenty of long hot summer days to look forward to though...hopefully.

It is most rare for me to use neutral colours, I am drawn to those bright primary colours, but this glass is new to me, Jupiter Storm and its a soft creamy ivory pinky colour, totally gorgeous.
So...that's this weeks round up. I do have some Gordy stories to tell but I really must get on and hoover up this house!!  Have a great weekend.
Laney x
Posted by Laney at 3:25 pm 2 comments:

This morning started out as any other, beautiful sunshine, blue skies and dogs eager to go down to the river.  I hung the washing on the line to blow gently in the warm breeze, got dressed, pulled on my trainers, grabbed the dog leads and watched the sun hide behind the dark clouds...got a jumper...and headed out.

The wind had turned a decidedly cooler and stronger kind of gust but still was a pleasant morning to be going to the river and having our daily walk.  I get to scratch a couple of young calves on their noses whilst their mothers looked on approvingly or just thankful that someone else is paying attention to their young and demanding teenage offspring, whilst my two dogs jump and splash in the river.  Nearing the entrance to the river, through the kissing gate, the dogs were getting excited, Iz was trying to get the ball from me before we could get to the field and Defi was beginning to annoy with his constant weeing on every single blade of grass he could drag me too, when I saw a friend.  This friend is an older gentleman, a man of standing, a retired Captain with a lovely dog Dennis.  Usually the wife is with them but this morning the two boys were on their own and just leaving having had their walk. As they drive to the river, not being as close as me, they were already in their car.  As good manners dictate, Captain, as he shall be called, stopped to say good morning.  Defi was beside himself, we were stopping to chat, didn't I know there were blades of grass that needed his urine?  Iz couldn't contain her energy and my not quite 8 year old Golden Retriever started jumping up at me like a naughty puppy of 32kgs.  We chatted for a moment or two through the open car window, Captain having pulled up next to me on the lane.

Our lanes are narrow, one car wide or two very small cars with young drivers or those that are just obnoxious and rude.  We get tractors, cows and sheep being moved from field to farm, cars, joggers, walkers, all manner of traffic on our quiet lanes few and far between but mostly considerate.  Today is bin day.  The local refuse collection lorry comes down our quiet lanes on Wednesdays so everyone's bins are out and ready, when the peace was shattered by a cyclist careering round the corner in the middle of the lane at top speed yelling 'there's a car' to his partner, who turned out to be a woman going equally as fast.  I would guess that they were married, or at least a close couple due to the fact both wore matching black lycra clad bodies, identical cycles the kind with paper thin tyres and lightweight frames and those ridiculous looking helmets, which do protect the head but which those speeding cyclists seem to think that they need a long pointy bit on the back, which, in my opinion, just serves to give passing folk a good giggle as they look completely like idiots.  This lycra clad, testosterone fuelled man then started to swear loudly using plenty of obscene words, both Captain and I couldn't contain ourselves and both blurted out 'slow down then' to his torrent of abuse, it was at this point that the second lycra clad blurr whizzed past.  Mr Lycra, whose clothing left nothing to the imagination and I can only assume that he cycled so fast to make himself feel like a real man as his skin hugging attire was lacking in any lumps and bumps, then threw himself off his bicycle in a fit of toddler screaming tantrum and started to behave in a manner most aggressive and unbecoming.  Thank goodness my dogs were behaving and with me as I do believe that he would have approached both myself and Captain such was his fury.

After a few minutes of him making hand gestures from his forehead and using words that a good woman...maybe not me...would blush at, he got back on his bike and flew away.  I can only hope that around the next bend was the bin men in their rather fetching bright green truck.
Posted by Laney at 7:55 pm 6 comments: