Today is the reveal day for Art Elements January Component of the Month, which this month of January was from Lindsay Starr of Phantasm Creations and of course one of the very talented admins in the Art Elements team.

When Lindsay first showed the cabs I was really keen to get started, something about them appealed to me on so many levels and her photos (and mine) really didn't/don't do them justice, in the hand they are remarkable little pieces of art, something you can imagine tucking into your pocket and carrying with you to just touch whilst you are walking the dogs, like when you were a child and carried that really special something with you all the time. 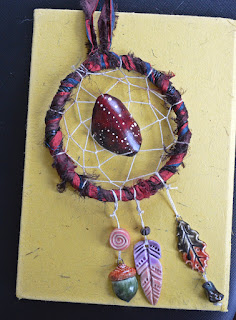 When the parcel arrived it was filled with lots of little components which we could use if we wanted, the ribbon I have used in mine was included with the cab and it was if Lindsay knew what I wanted to do as it was just enough and perfectly compliments the dream catcher I wanted to create as soon as I saw that first photo of the cabs - when they were still in the USA, I was like a cat on hot bricks waiting for mine to arrive so I could get started!

I made this dream catcher and it now hangs in my bedroom with my other one.. and I think I need a collection I just love them, but you need the right 'middle' and as I keep saying this cab was it!

I drilled four tiny holes in mine and using some ecru crochet thread I weaved the 'spiders web' pattern which wasn't as easy I first thought and I ended up re doing it several times until I was happy.  The web is over the ribbon which is over a layer of leather thong over a copper wire circle all of which I fabricated from what I had in the studio.

All dream catchers have feathers and I didn't have any!  A friend of mine sent me some yellow feathers which I thought would compliment the colours but I struggled to tie them into the hoop and ended up getting frustrated so abandoned the 'real' feather idea.

I dug in my stash of amazing ceramic beads because I remembered that Karen and Lesley and Jenny - from the team - had sent me some beautiful ceramic beads since I have joined, that I was saving for the 'right' project and I had a ceramic feather and the acorn and the leaf, the tiny little bird and the swirly disk bead and they were perfect!  The feather I would have liked to be less pinky more wine coloured but I am willing to over look that small detail as the beads were just perfect for my dream catcher. 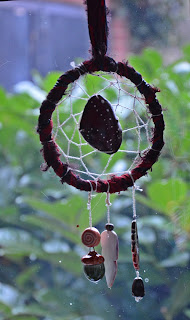 This is the first dream catcher I have made but I hope it isn't the last and you can hang your treasures from it making is so special.