Those mogs above are my geriatrics.  Claude, on the left is about 19 and Megan, on the right, is around 21.  Both cats were rescued many years ago.  Claude was dumped on the farm we lived on, when he was about 1 yrs old and Megan had a terrible life before finding her way into the Cats Protection League in Kent, where I found her.  She was estimated to be around 3/4yrs old then, and due to her terrible life before, has never been a 'family' cat in the sense that she would sit on your lap, or even take a fuss and stroke without trying to scratch or bite and get away.  We have just left her too her own ways and loved her unconditionally anyway, and she in turn, has spent her summers in the garden, hunting mice in the fields and her winters on top of the boiler in the utility room.  A few years ago, when Meg would have been about 7/8 yrs old, she had a nasty accident on the farm we were living on.  Suffering with a dodgy shoulder, she had been out hunting and obviously slipped, landing on something sharp, that penetrated her paw.  We think she fell on some sharp blade on a tractor or something.  She made her way home, but it had been several days and we were starting to think the worse for her, but she struggled into the house and collasped onto the floor, where I found her and rushed her to the vets. The vet was certain she would lose the leg, at least the paw, the infection was so bad.  We had to soak her poorly paw in hot water and squeeze the infection from it.  We did this for at least a week and Megan let us do it without a murmur, then one day she attacked me.  I was so pleased.  She had pulled through.  I rushed her back to the vets and proclaimed her cured.  Proudly showing off my new scars and scratches!  From that day, Meg has let us stroke her and seems to accept that she is safe, but, she still spends her winters on top of the boiler, with all four legs and paws.  Other than plenty of sleeping and no longer hunting, our Meg is showing very little signs of age.  She is now deaf and I suspect her sight is faltering, but she doesnt stray from the garden so is nice and safe, and she still swipes our Golden Retrievers when they step out of line!

Claude has always been a big softie.  Having still been a kitten when we found him, he has always known love and affection and lapped it up.  He sleeps where he pleases, the printer, the bed, the kitchen table, anywhere he can shed fur and be a nuisance, including on my beads! He was a fabulous hunter and age it seems has not stopped him trying to catch the rats from the farm, that are almost as big as him!  He has no fear of cars, lorries or tractors, to his cost, as I ran him over on the drive in our Jeep about 6/7 yrs ago - according to the vet the best car/vehicle to run him over with as the wide tyres distribute the weight evenly...Claude was not so sure! - even after breaking his pelvis he still sits in the middle of the drive and dodges the traffic on our quiet country lane.  Which yesterday, was nearly his down fall.

Unlike Megan, Claude has aged rapidly in the last 6 months.  He has lost weight, so his once big fluffy body is now slim and slightly bony on the joints.  His eyes are rheumy and I suspect his sight is quite limited now.  He is deaf, until you open the larder then once again he is a kitten, and he is most definitely losing his marbles.

My daughter and I did a boot fair yesterday and managed to get rid of some of the clutter in the garage.  We came home and were unloading the car, when the dogs ran to the gate and started barking.  I looked up and saw two cars, one slightly on our drive way.  This isn't unusual as the lane is narrow and one car has to pull into the drive way to allow the other to pass.  What was unusal was they had stopped.  I took a quick second glance and was just about to call the dogs to shut them up, when I realized a lady had got out of her car and was cradling a long, dangly, black and white cat.  My heart stopped in my mouth.  Claude.  I ran down our drive (which isn't too long but.....) and out of the gate.

The lady, turned to me and said 'she was just sitting in the road'.

I blurted out that 'she' was a 'he'.  Totally irrelevant fact, but at the time it seemed most important.  The chap in the van was looking concerned and I thought Claude had been hit.  He turned his little face towards me, and the expression, 'lights on no-one home' came to mind.

He was just sitting there.  Minding his own geriatric business.  But thankfully he is fine, lucky, but fine.  During the summer we get alot of traffic (for us) especially on the days like recently, when the weather has been glorious, as people like to go down to the river, to fish, to picnic or to walk dogs and children  - both children and dogs getting thoroughly worn out so the parents can enjoy an evening of peace no doubt!  So, Claudey was lucky that these people were paying attention to the lane (not everyone does).

I took him off the lady, all of his bony self, and hugged him tight.  He may be old, he may be geriatric, he may be sick when his food disagrees with him and he may forget where the litter tray is during the night and use a corner, but he is still our Claudey and we love him.  However, he is now banned from leaving the garden!!  I don't think my heart stopped hammering for a good half an hour and my daughter - he is her favourite cat - even shed a few private tears over what might have happened...she doesn't know I know that bit.  He is old and we know that both he and Megan are very elderly mogs and both have been loved and cherished for many years, but, you can't help but be grateful to strangers that stop and pick up an ancient, bony old mog and give him a cuddle.

He is currently fast asleep on the table in the garden, I just hope he stays there! 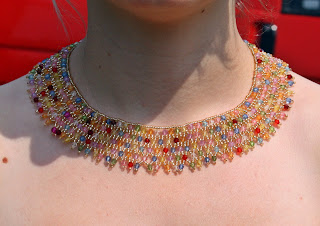 Its been too hot to torch this week, so I finished my first piece of netted beads, moddelled by my daughter.  When its been cool enough, not often enough for me, I have ventured into the studio and made just a couple of beads.  I am loving the dragons at the minute and the fairy door toadstools, inspired by Fiona of WINIBI, Fairy Door (click the link to see one of her beautiful clay fairy doors)...this is one of mine.. 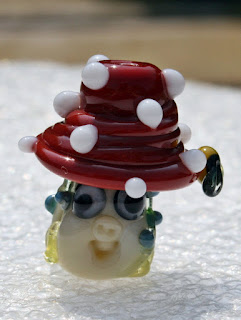 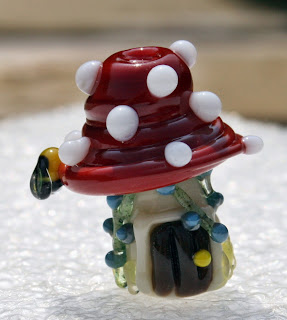 and finally, 'An eye for an eye...'  a beautiful sparkly dragon, he just glitters in the sunshine. 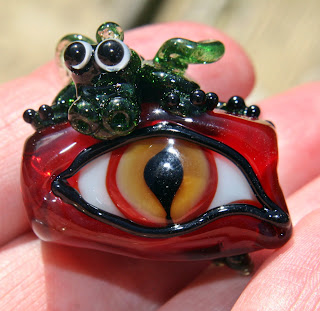 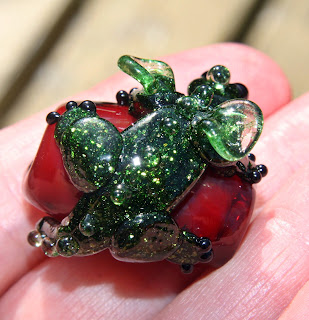