I keep everything although a recent allowance of the daughter into the studio meant my stash of cardboard boxes was reduced as she streamlined my 'junk' as she calls it.  Priceless pieces of something waiting to be even more priceless treasure I call it!

For this challenge I was torn between using some reclaimed glass that I have from an old stained glass window I was given in which some of the panes of glass are missing/broken or some reclaimed yarn that I brought years ago from a lady at a boot fair.  The yarn in question was once t'shirts that she has torn into strips and redyed to be one colour.  It is still waiting in the big box of yarn for another day as is the reclaimed glass. 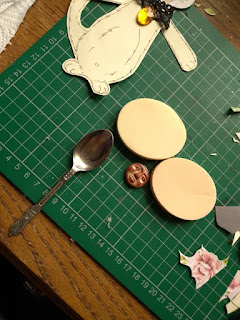 I have said before that my first love has always been drawing and paper and I have A LOT of paper, some old scraps from other projects, some cards from birthdays I couldn't throw away, wrapping paper, old calendars with pretty pictures on....  I keep the lot - and hide that box from my daughter! 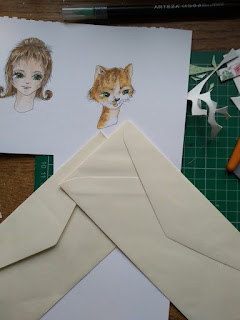 Old envelopes that have lost their cards for reasons only they know.  Make up sponges from years ago when I tried being a proper lady (top photo)..... 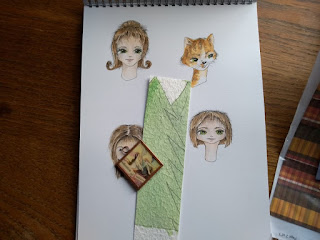 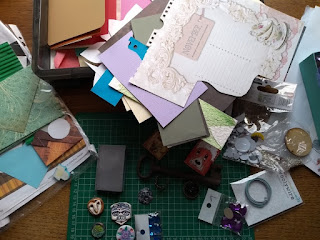 this myraid of treasure that has accumulated over the years. 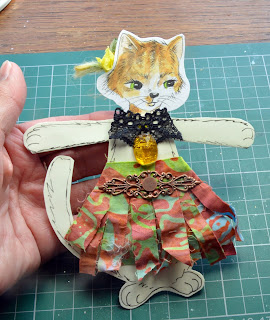 I decided I would make paper dolls.  I like paper dolls and I have recently been reading about art dolls, I even brought a book on Dada dolls which both enthralled me and shocked me.  The definition of doll is definitely out there for interpretation! 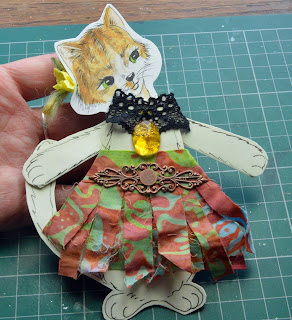 In one of the above photos you can see that I sat down one evening and drew some heads.  I didn't have an idea for the bodies other than I wanted to use discarded bits and bobs I had in my varied collections.  This 'cat doll' is made from one of that discarded envelopes and you could easily use an envelope that had been through the mail system - actually that one would be fun and you could use the stamps and have a travelling paper doll! 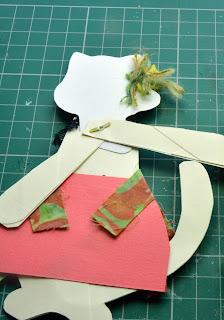 An old piece of card became the back of the skirt, a cheap metal costume jewellery ring was stretched out and became the skirt band that holds the pretty floaty folds of cut off material strips.  A bit of old lace and she is done.  All the paper dolls are articulated so her head and arms move. 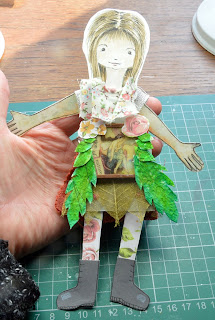 Next up is the doll that sparked the idea of the challenge as she holds the special treasure piece as part of her body - close up photo below. 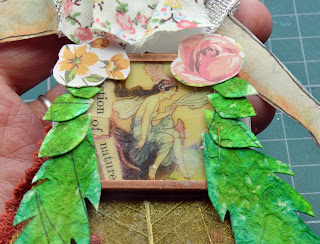 Jenny from the team gifted me this pendant some time ago and something about it really appeals to me.  It does have two sides to it but I love this side.  It says 'reflections of nature' and that is what inspired her 'theme' 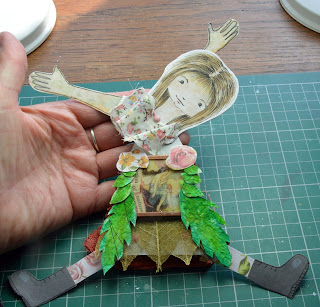 Her legs are from an old calendar that is decorated with pretty flowers, her bodice is the same pretty flowers but a scrap of fabric.  The russet coloured back of her skirt is from a swatch of material that was used in some packaging in a parcel I received from Nicky in the team from our Secret Santa at Christmas.  The golden lattice style leaves I have had for so long I think they have their own air miles as they have travelled from house to house with me for well over a decade, they made the perfect 'front' of the skirt and the green leaves are cut from that expensive discarded paper painting. 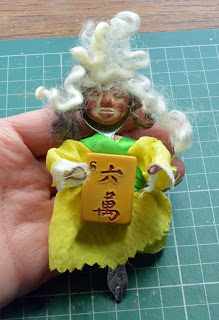 But I wasn't finished.  I have these spoons that were gifted to me a few years ago as they reminded me of my Grandmother and I love them.  They are Apostle spoons and have been in a drawer as I won't use them for their intended purpose, we have normal spoons for that!  Her face is a ceramic cabochon from Lesley of the team which I stuck down with some of that makeup sponge above as I need to fill the spoon space.  Her hair is some bits of fleece. 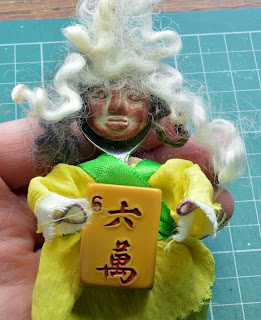 Another saved treasure is this tile, again gifted from Jenny many moons ago.  The yellow silk scrap was in a swop with Nicky  - the middle bit that I cut out to go over the spoon body is the flower in the hair of the cat envelope paper doll, nothing was wasted in this challenge!  The green ribbon was from a birthday gift I received last month. 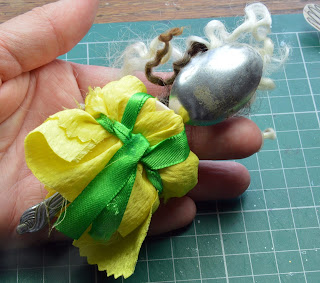 Below is all the dolls altogether.  I had a lot of fun creating these dolls.  They are not gallery worthy pieces but they used up pieces that would normally have been discarded, laying at the bottom of a box forgotten, gathering dust or at the back of a cupboard languishing unloved. 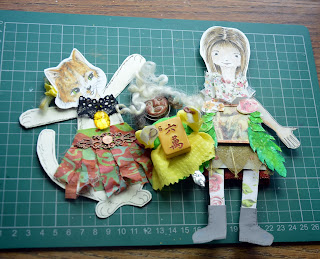 This piece I haven't quite finished, it needs a frame and I have an idea of how to construct it but haven't had the time to do that.  This was an old tobacco tin that I have had for 'ever'.  I think it belonged to my son and I stole it for some purpose many years ago.  I wanted to create a diorama in it, which wasn't easy as it isn't very big.  I quite like where it is going but it does need a 'finish' to it. 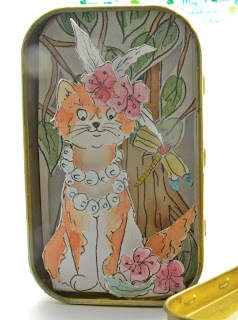 The one other thing I have recycled this month is this cushion - not the cat that is Freddy Bear a recycled feral turned house dweller.  My husband brought me as a surprise a V pillow as I like to read before I go to sleep at night and often complained I wasn't comfortable enough - I can read for hours and forget time if I am totally engrossed.  Sewing isn't one of my skills although this last winter I was on my own for a few months whilst the husband worked away so I 'borrowed' my daughter's sewing machine that was in turn gathering dust in her wardrobe through lack of use and taught myself to sew. 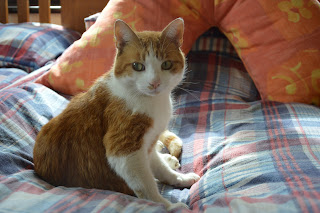 I rummaged through our little stash of materials that I have carted about from house to house and found at the bottom of this box this lovely bright orange and yellow thick fabric that I once tried to make blinds for my daughter's bedroom in the old house.  I failed, obviously but I kept the material.  I made myself a rough pattern with paper and covered my V pillow I even had to join parts of the fabric together to get enough width.  Freddy Bear is modelling the pillow for me so you don't see that I did make it a little too big on the apex of the V so it is a little baggy but he takes the eye away from that mistake.  I can highly recommend V pillows for reading in bed, it is so comfortable!

Below is the list of the others that have taken part in this month's challenge.