This month the challenge from the Art Elements team was set by Cathy Spivey Mendola  and was Birds of Prey.  To read the post click HERE

All of the Art Element team members are seriously talented and Cathy is no exception.  Her needlework and mixed media pieces are some of my favourites ever.

At first, for this challenge, I looked out of my window and watched the birds of prey we have landing in the paddock.  Unfortunately, other than I know they are birds of prey and possibly Red Kites or Kestrels that is where my knowledge ends.  It isn't very extensive!  I did look up a few of the birds, the ones native to the UK, to see if I could identify them but in all honesty I just got a bit more confused.  I wanted to do something that involved the birds I see daily.  I am really lucky to have this opportunity, in fact I have just been sat in the garden (unprecedented weather in February here in the UK) having a cup of tea and watching one of the birds circle round and round and dive down behind my hedge to its prey.... I did have one eye on Miss 'Mudge the only cat of the house out with me at the time! 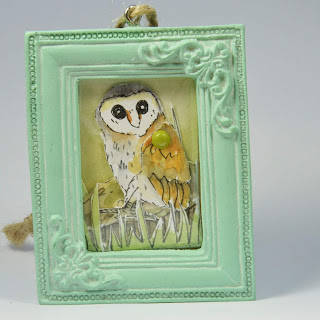 I spent most of this month thinking of birds of prey and not really doing a huge amount about it as I really wanted to use the birds I see but not being able to find out which species they were I eventually 'settled' on the humble owl.  A bird well known in all the world.  Again I am really lucky to lie in bed at night and listen to the owls around me hooting away.  It can get a bit creepy late at night if I am on my own.  Anyone who thinks living rural is quiet has never left the city.  It can get really loud here with the wildlife, but I am not complaining. 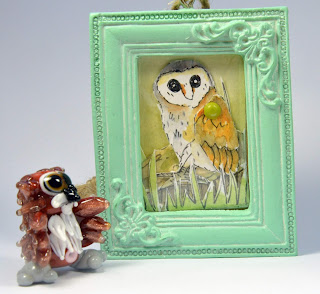 Last summer I was gifted by Lesley of the team three little frames that you hang from a hook.  They are small and very pretty.  I decided that being in a drawer wasn't doing them justice so I chose one, the green one - I have another green one and a purple one that I wanted to 'get round to' but this month has been a bit busy with vet visits and life as my big bruiser ex feral cat has dislocated his hip... I digress...

I wanted to layer a painting in this frame which was not for the faint hearted as the frame itself is only 2.5 x 2 inches and the aperture/window is only 1 x 1.5 inches.  I managed 4 layers, the background, the rock, the owl and the grass in front.  The owl is articulated in that his wing moves on a split pin.  He is obviously in the frame so not easy to move but that was how I wanted him so I went with it.  I am terrible at over analysing why I do things and if it is relevant, my promise to myself this year was to just 'do it' and stop waffling on! 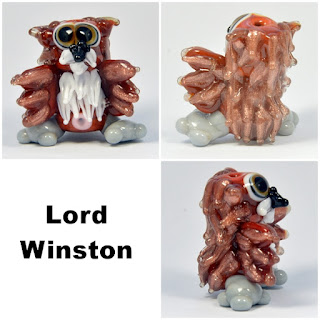 I make quite a few owls in glass, I rather like them and they all come out so differently.  Lord Winston is February's owl.  I think he looks rather austere and could possibly be the chair-owl of the parish council, he just looks that sort of fella! 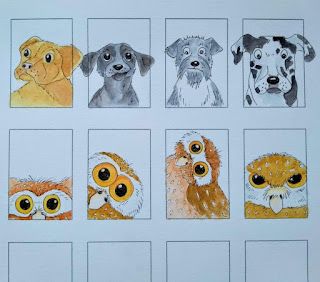 ...and doodling....  I am rarely still and doodle constantly, these little owls appeared one evening during such a doodle....

To see what the rest of the team and guests have done with this challenge please click on the links below.  I hope you enjoyed seeing what I have created this month.