Reveal for the Art Elements themed challenge of 'white'.

At the beginning of December Claire from the Art Elements team announced that the themed challenge would be 'white'.  To read that blog post click HERE

To me white is not a colour, maybe that is the 'colourist' or 'artist' in me but I have always understood white to be a 'non colour' like black because it isn't present on the spectrum and can only be mixed by the eye mixing light wavelengths - I do love the theory of colour but that is not the topic for this blog challenge.

I love colour.  Big, bold, vibrant colour.  I love contrasting colours or clashing colours.  I love black too because it is slimming! but white in our house and in my life is a no no....I have dogs and cats!  whether that alone makes me avoid white I don't know but because I rarely use it in my art I decided rather than use 'white' for creating I would not use colour. 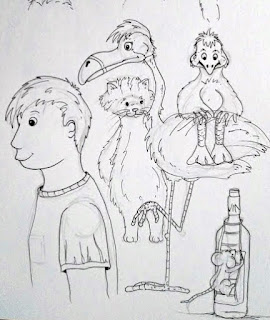 I concentrated my doodle sessions with just the white of the paper, but I couldn't avoid using black fine liner pens to define for me the white areas.  I did try using just a pencil but for me the contrast wasn't enough.  So really my challenge is more 'monochrome than white'. 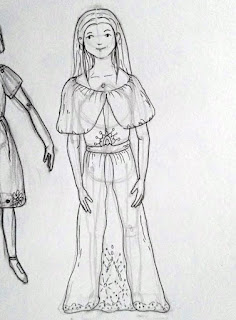 I started doodling 'dolls'.  I had this idea in my head that I could create a doll like figure in just white.  I did think I would use fabric for this but then decided I wanted to use paper.  Just white paper.  The 'doll' above was originally going to be cut out and have some other outfits to clothe her like the dolls from my childhood that you used to get in magazines - the more I read about paper dolls the more fascinated I have become with them and their history is as old as mankind itself, well maybe not mankind exactly but certainly since paper has been used by scribes. 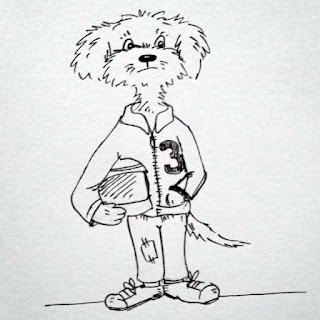 This little chap and the mouse below were just doodles in my sketchbook.  I did enjoy creating 'just white' doodles although I will admit to be itching to colour them in! 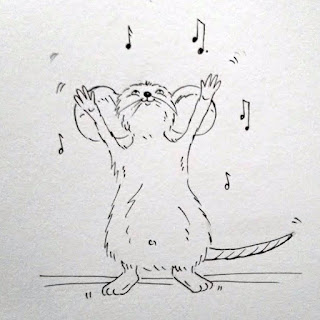 Which brings me to my 'finished' piece.. well actually it isn't finished because I wanted to create more of a world for her but life and Christmas got in the way.... 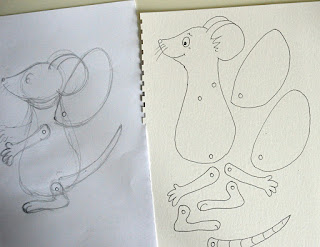 My little fairy mouse, Esme,  from an Art Elements previous challenge
has grown on me and I doodle her quite often.  I have got rather attached to Esme as a character, so I decided to create her as an articulated paper doll.  The photo above is the original sketch working out where the pins would go and then separating the 'pieces' to cut out.  Both papers are white and fascinate me that 'white' comes in many 'colours'. 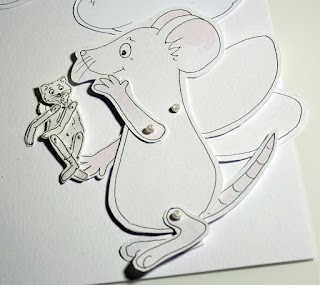 I didn't have any white split pins so I decided to use beads and thread which works really well.  I did attempt to create a tiny articulated doll with beads as the movable parts... it was fiddly!! 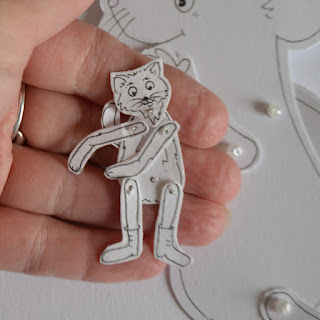 Below is a project I started and probably won't finish because it just didn't hold my attention.  The idea was that I would gather together all sorts of bits of 'white' materials.  So the base is a white felt over laid with white linen.   White ribbon was attached and I glued on a white glass cabochon I fused way back when and I wanted to include paper as a material so I cut out a doodle I had of a dogs head and stitched it on with white embroidery thread.  The idea was to surround the glass cab with white beads and embellishments but I became disillusioned with the lack of colour although all the white materials intrigued me with their different hues and tones. 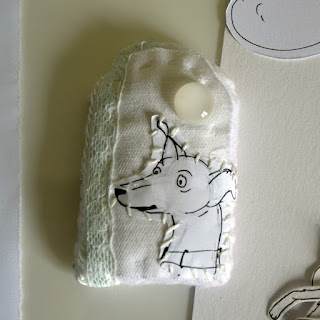 Below is all the guests and Art Elements team members that have taken part in this challenge, I will be very curious to see what everyone has created.
Guest Artists
Alysen
Anita
Beth
Cat
Divya
Elaine
Hope
Jill
Karin
Kathy
Lucy
Rozantia
Sarajo
Susan
Tammy