It transpires that we have a situation. 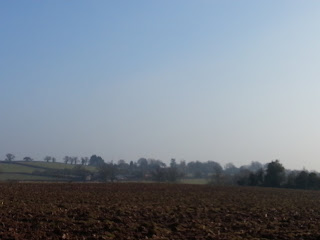 This is where I live, its beautiful isn't it?  I took this snap shot the other day whilst walking the dogs across the fields and into the ancient woods, if you look really close there is a couple of houses in the middle, I live in one of them. 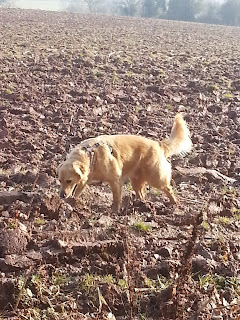 Defi above mooching in the recently ploughed field no doubt looking for a dip that has filled with dank smelly water for him to lie in! 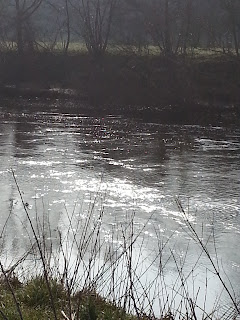 The river Wye, so beautiful with early morning sunlight dappled on the surface.  This morning the ducks were out and bathing making me feel that Spring is indeed coming. 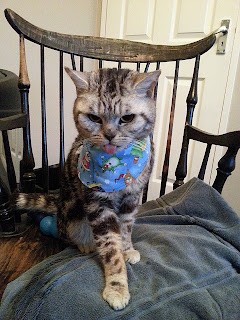 The problem.  Gordy is a cat, but not your average cat... 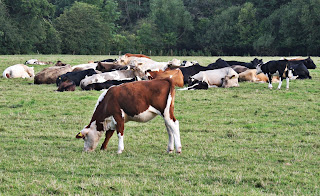 ... and when you live in rural farm land surrounded by cows, sheep, pigs and a working farm with tractors, hay bales, silage and all the ponds, barns and equipment of a farm..... 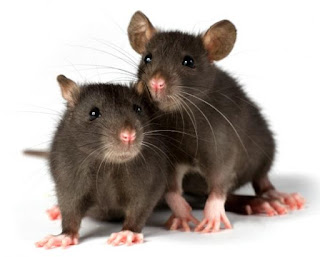 ...you get rats.  Now I don't mind rats, used to keep fancy rats years ago as pets and loved them.  I like the soft silky dry - I know that is a contradiction in words but to me they are soft, silky, scaly and lovely - tails, their twitching noses, tiny toes and tickly whiskers.  I love rats, well pet ones, the outside, independent, going my own way, going to eat your shed, live in your compost and under your studio, sort of rat.. not so keen. 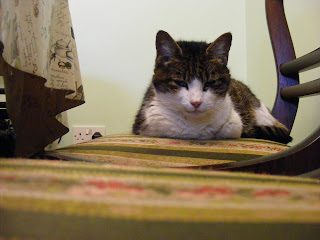 That was our Megan in her later years.  She passed away about a year before Gordy came to live with us at the grand age of 23 and she was still going outside to hunt those pesky rats, mice, voles, moles, birds, foxes - she was a force to be reckoned with was our Meg she ruled the house and garden...and parish, even badger kept his distance and only once or twice was an adder snake brave enough to visit the garden and even then he was found hiding, fearing for his life, under the car and was only too happy to let me take him across the lane and put him in the field where he slithered off, away from Meg.

I like snakes too, they remind me of rats tails. 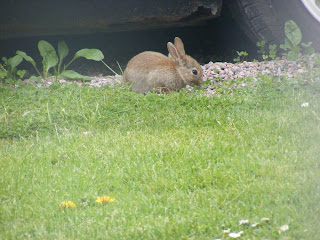 We are so rural we get all sorts of wildlife, badger, fox, owl at night, pheasants...  to name a few and we even get the cute bunnies, this one was taken a few years ago when my husband had a car rusting quietly away on the drive and yes, rats moved in to it and were very happy in the engine bay for a while until the husband found out and finally had the car removed.  They did me a favour those rats I had been moaning for a good couple of years at him to get rid of that rusting heap of metal. 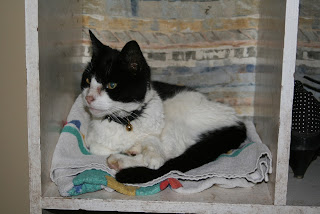 Our Claude.  Such a mighty mouser.. and ratter.  He is seen here in the final months of his life, he did go senile and took to sleeping in the shoe cupboard so we cleared cubby hole and put an old towel in there for him to lie on.  We lost Claude at 22 just a few weeks before Gordy came here, really losing Claude left the gaping hole that meant we were cat less for the first time in 20 years but it also meant that Gordy with all his quirks, could come and live with us, 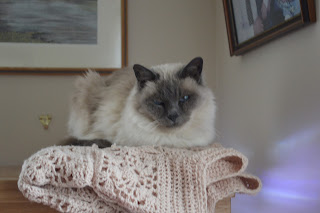 who was followed a year or so later by Teeko, the other problem.

You see neither Gordy nor Teeko are outside cats, Teeko used to be when he lived next door but he only ever went out to his garden, he is a natural house cat and he likes nothing better than sleeping on top of the fish tank or on my daughters bed.  Teeko is also a bit of a wuss and I think a face to face meeting with a rat would send him dashing in the opposite direction tail waving a hurried good bye.  Teeko is also coming up to his 14th birthday so as an old boy who has been relocated to our house we let him be the house cat he wants to be.

Gordy hasn't got the skills to be outside on his own nor to hunt, the only thing I have watched him hunt is flies, of which he doesn't catch, and once a wasp in the summer.  I was confident of the fact he couldn't catch the wasp so let him jump about around it like a possessed kangaroo taking hypnotic drugs and was most surprised, although not as much as he was, when he accidentally put his paw out and managed to stand on the wasp, who in turn stung him in the paw but even then Gordy just stood there, paw still on the wasp looking at me running across the grass to rescue him and remove the stinger whilst apologizing profusely to the poor stunned wasp for letting Gordy annoy him that bright and sunny afternoon.

So we have two cats and no ratters.  Poison isn't an option, I don't like the thought of the rats suffering long and painful deaths and besides we have dogs and that doesn't bare thinking about should they get either the poison or the infected rat.  The husband suggested some feral cats, just a couple that could live in the garden with access to the big shed, the little shed, the garage and we have enough space to build them a bespoke shelter should they prefer it.  I like the idea of giving homes to feral cats but allowing them to still be themselves, older cats needs protection from the weather and someone to keep an eye on them but like to be left to do what cats do.  Hunt.  Hopefully!

I think we are going to do it but now the problem is me, you see the family want them to remain feral and help with the vermin so that it doesn't become a problem, but we haven't got them yet and I want to donate the original cat tree to the shed for them and Catie and Carl are good names for feral cats... right?